The Organization was formed to create the much needed voice for industry in the face of a strong workers’ movement the Antigua Trades and Labour Union.

The stated objectives were, to inform members of prevailing Labour laws and practices, to advise members as to the interpretation and applicability of said laws, to organize Employers into a respectable Association, to advise and represent Employers’ in their various challenges in dealing with workers and their representative trade unions, to promote Collective Bargaining, to oppose legislations which are disadvantageous to Employers, among others.

To promote and protect the interest of our members and the general administration of employment relations through effective advocacy, collaboration, and social dialogue, by providing value-added services to facilitate an enabling environment for business sustainability and global competitiveness.

To be the pre-eminent Employers’ Federation by effectively ensuring the viability and success of local and regional businesses to achieve global competitiveness. 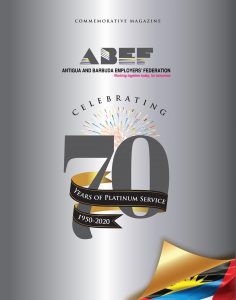